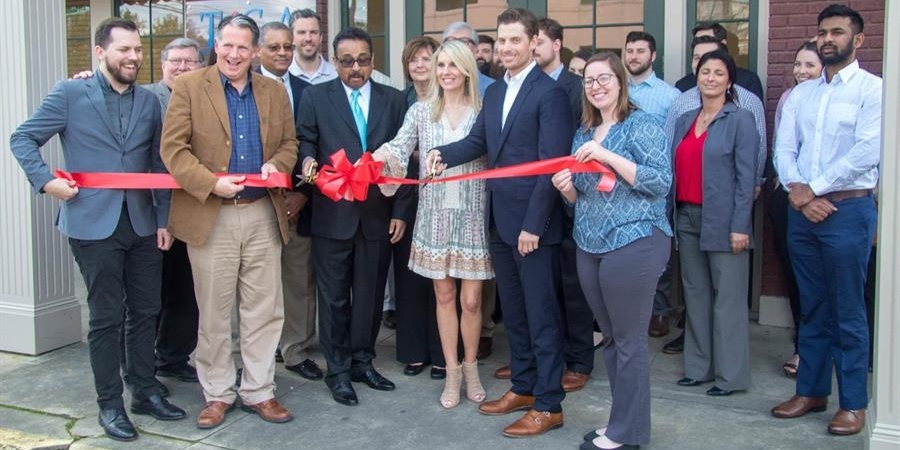 When John Miller decided to start The Integration Group of Americas (TIGA) in February 2017, he had the support of his family, a veteran business partner, and a few years of experience working in the tech-industrial space.

He also had the support of the Opportunity Machine, a business incubator whose sole purpose is helping fledgling startups find the road to success and stay on it.

One year and 40 employees later, TIGA graduated from the OM at the Lafayette Immersive Technology Enterprise (LITE) into a private office at 201 West Vermilion St. in Lafayette.

“My journey has been very interesting,” Miller said at the graduation, held March 19 in the company’s new downtown digs. Going into business, he said, was like “jumping off a cliff, hoping you have a parachute before you hit the ground.”

Miller landed softly and profitably. He and co-founder Salil Gopinath now have employees stationed near producer and pipeline customers in The Woodlands, Denver, Dallas, and Oklahoma City. TIGA’s current customers are in the oil and gas production business, drilling the hot shale plays across the country from California to Pennsylvania to North Dakota.

What TIGA doesn’t have is clients nearby. There are none in Lafayette, none in Louisiana. It’s a sign of the times; offshore oil and gas – where Lafayette’s energy sector primarily worked – is in a prolonged downturn.

Miller, 36, said though he’s open to working for Gulf of Mexico operators, the opportunity hasn’t yet been available to TIGA, whose employees basically integrate software systems that communicate seamlessly to send reliable data from the wellhead or a pipeline to a client’s faraway engineers and accountants.

However, Lafayette’s long history in marine oil and gas has helped some in the industry get jobs in far-flung North Dakota, Colorado, west Texas. The expertise, Miller said, still resides in Lafayette.

Mayor Joel Robideaux said TIGA’s emergence as a job creator and downtown entity is an example of where Lafayette is headed: a tech and cultural hub that’s a destination for young professionals who move here unemployed because they know that jobs in their fields are plentiful. “I want them to know what we have to offer,” Robideaux said.

“We are extremely excited to have John Miller and his team growing in Lafayette. Employment opportunities at TIGA are the “Gold Collar" standard of professions that require high skill sets and are in high demand,” Ortego said. “TIGA’s growth here adds tremendous value to our efforts to recruit more of those workers, which will in-turn help with business recruitment in Lafayette Parish and Acadiana."

Miller said starting and growing TIGA at the OM relieved him of several worries. As TIGA grew, Ortego ensured larger offices were available. Before Miller and his crew moved out earlier this year, TIGA moved into larger offices at The OM four times. There was no need to buy or rent furniture. There was just the nominal fee for rent, no worry about utilities, and a theater that’s used for training.

And across Devalcourt Street from The OM and LITE was Gothreaux and his staff at LEDA, where experts in workforce development, incentives and other specialized programs work.

“We were able to hit the ground running. We focused on hiring, we focused on projects,” Miller said. “I went to Destin and Zach (Barker, former OM director) and said ‘I’m going to have 20 people in six months. I am going to need a bunch of space.’ They said they’d help me with everything they could.”

Miller said starting TIGA was the best career decision he’s made. “I had just resolved in my mind that it was time for me to do this. I felt one way or another, just looking at the oil and gas market, that we’d find opportunities.
“And we did,” he said.

“I love the spirit coming from the private sector. … We have to create this culture (in Lafayette) where millennial talent wants to move and grow.” Lafayette Mayor Joel Robideaux.

“It was good working with people who cared only about helping you. There’s no one else who does that.” John Miller, co-founder of The Integration Group of Americas, or TIGA.

TIGA is an example of merging technology with oil and gas. “This is just the beginning.” Gregg Gothreaux, president and chief executive of the Lafayette Economic Development Authority, or LEDA.

TIGA is a systems integration and engineering services company strategically placed to meet the needs of the economy driven by energy, water, and data.

Join Us At The 2018 Ignition Community Conference